Every second, the human body sends thousands of messages between cells in order to regulate the functions of the body. Fibroblast growth factors (FGFs) are messaging signals that are involved in a number of critical metabolic processes and have a wide range of cellular responses. However, it is not fully understood what mediates these different responses. Central to the role of FGFs is their interaction with large membrane-bound proteins, called beta-Klotho receptors. Understanding the mechanism of action of FGFs could prove especially valuable for the treatment of metabolic diseases and cancers.

Recent work by Ekaterina Kuzina and colleagues has solved the crystal structure of the C-terminal domain of FGF19 (FGF19CT), bound to the extracellular domain of beta-Klotho (sKLB). To overcome the traditional challenges of crystallising unstable membrane proteins, the researchers used a nanobody chaperone generated at the Instruct Centre BE, which allowed X-ray diffraction to a resolution of 3.2A. 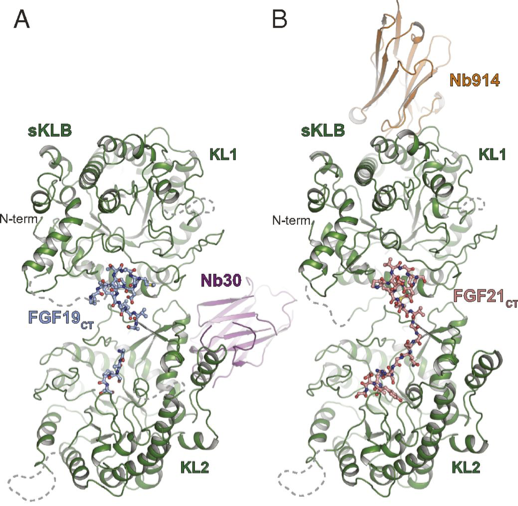 Results shown in Figure 1A show the crystal structure of the beta Klotho extracellular domain (sKLB) complex with FGF19CT. The position of the nanobody chaperone Nb30 is shown in purple. These results were compared to previous work where the structure of the sKLB complex bound to the C-terminal tail of FGF21CT was determined, using nanobody chaperone Nb914 (Figure 1B).

FGF19 and FGF21 bind to the same site within the beta-Klotho extracellular domain, although comparison of the crystal structures show variation in the distances and angles between the extracellular ligand-binding regions KL1 and KL2. These differences in binding may explain the differences in cell signalling for the two molecules.

Binding affinities and cellular stimulatory activities of FGF19CT and FGF21CT were compared, along with a range of chimeric mutants to cells expressing beta-Klotho, to reveal greater detail of the general mechanism for recognition of FGFs by Klotho proteins and regulation by FGF receptors and tyrosine kinases.

This study is a step towards understanding how FGF mediate metabolic pathways, and will help in developing new treatments for metabolic diseases.

To find out more about Nanbody discovery at Instruct-ERIC, click here.