During cell division, duplicated DNA needs to be evenly distributed between two daughter cells so that each receives a single, complete set of chromosomes. When chromosome segregation fails, the consequences can be catastrophic - causing genetic disorders, cancer and cell death. The centromere is a specialised region of chromatin (DNA and protein) that plays a crucial role in ensuring accurate segregation of chromosomes during cell division. Whilst the intricate mechanisms of the centromere have proven challenging to decipher, cutting-edge visualisation tools have allowed scientists at Instruct Centre FR1 to gain new insights into the functional structure of centromeric chromatin, including the first images of a multi-protein rosette-like structure.

In humans, the centromere is a 171-base pair, AT-rich sequence of DNA that forms the point of attachment of duplicate chromosomes and a foundation for assembly of the kinetochore (the protein structure that separates chromosomes during cell division). The centromere is associated with a specific histone protein, called CENP-A, which is deposited at the centromere with a histone chaperone, HJURP, during the G1 phase of cell division (the interphase during which a cell grows in preparation for DNA replication). To shed light on the 3D organisation of centromeric chromatin during G1, Leonid Andronov et al. undertook super-resolution microscopy, including single-molecule localisation microscopy.

Using a variety of optical techniques (dSTORM, PALM and STED) and cutting-edge image analyses (including newly developed Voronoi-diagram based segmentation and reconstruction methods and software: see Andronov et al., 2016 and Andronov et al., 2018), the team were able to visualise well-defined clusters of CENP-A within the centromeric region, and could identify structural changes as more CENP-A was deposited. It was found that in early G1, CENP-A clusters formed a 3D rosette structure, with HJURP at the centre, serving as a nucleation point for deposition of CENP-A. Later into G1, CENP-A was accumulated, and the clusters transformed into spherical, cloud-like structures, with diffuse edges and a compact CENP-A structure at the core. 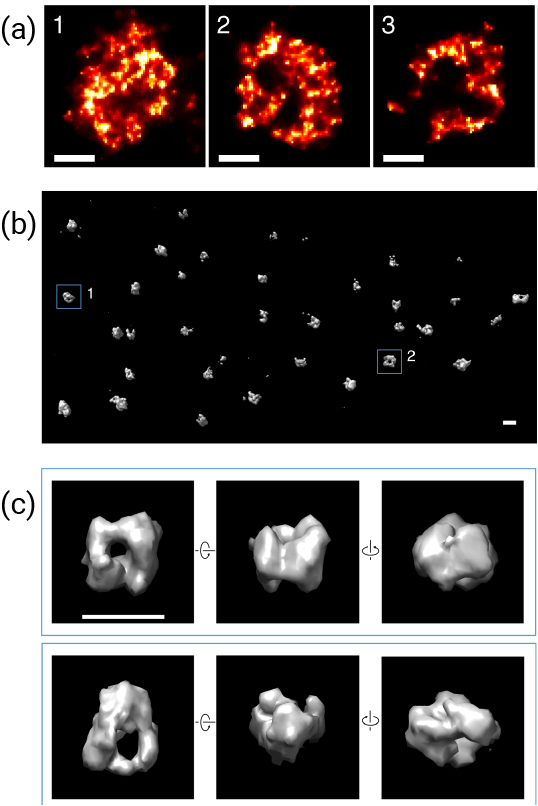 Significantly, the rosette-like structure of the CENP-A complex was found to be conserved in all human and mice chromosomes that were imaged, suggesting that this structure has an important function. Whilst the exact role of the CENP-A complex is currently unknown, the authors suggest that the rosette structure helps to deposit CENP-A in the centromere, which is crucial to its function. It is hoped that with further analysis of CENP-A deposition, it may be possible to further unravel the fundamental mechanisms that underpin cell proliferation.

Find out more about the Instruct-FR1 facilities that are available through Instruct.

This work was supported by the Instruct-ULTRA project.