Since the start of the COVID-19 pandemic, researchers around the world have sought to understand the infection mechanism of the SARS-CoV-2 virus as a step towards designing new therapies and vaccines. Recent work at the Rosalind Franklin Institute has identified two nanobodies that bind to the key viral spike protein, inhibiting it from binding to the human receptor protein.

The SARS-CoV-2 virus displays a spike protein on the surface of the nucleocapsid, through which it binds to the human angiotensin-converting enzyme 2 (ACE2) as an entry point into the host cells. The spike is a trimeric protein, with a receptor binding domain (RBD) at the N terminus.

The purified the receptor binding domain (RBD) of the SARS-CoV-2 spike protein, was used to fish out binders from a llama nanobody library (small single chain antibodies) in vitro using phage display technology. A random mutagenesis approach, was then used to generate two affinity matured variants, H11-D4 and H11-H4, with significantly improved binding.

Surface plasmon resonance (SPR) was used in order to investigate the binding activity of H11-D4 and H11-H4. Results showed that both nanobodies inhibited the binding of both the spike protein and isolated RBD to ACE2, suggesting that the nanobody epitope overlaps with the ACE2 binding site on the RBD of the spike protein.

CryoEM at Instruct Centre UK revealed that both nanobodies bind to all three RBDs in the spike trimer (Figure 1). 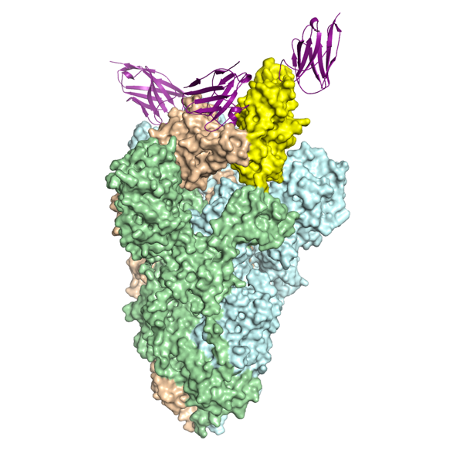 Figure 1. Electron microscopy structure of the spike (S1) trimer with each of three chains bound to one H11-H4 nanobody. The spike trimer is shown as a surface representation with the chains coloured cyan, green and wheat and one of the receptor binding domains highlighted in yellow. The three nanobodies are shown in purple. (Image courtesy of Prof James H. Naismith).

Finally, the nanobodies were fused to the Fc domain of human IgG1 to produce a homodimeric chimeric protein that could bind bivalently to the spike protein. Two neutralisation studies in vitro showed that the nanobodies could block infection of cells by SARS-Cov2.

Read more about CryoEM at Instruct-ERIC.